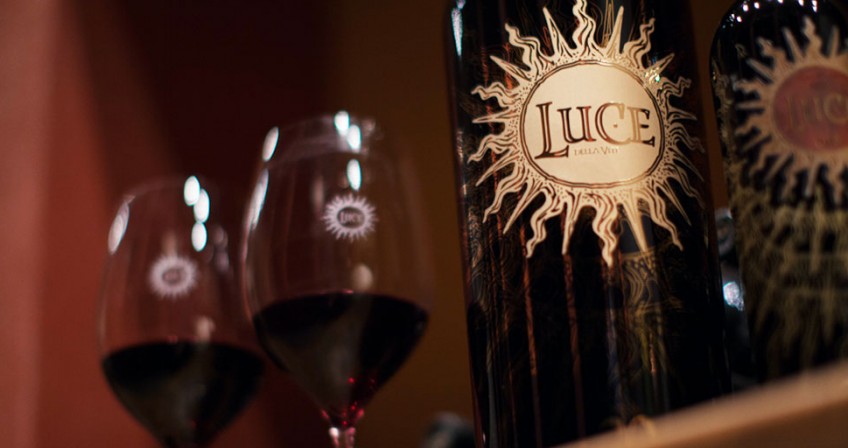 For Autumn-Winter 2015|16 style frames, we had the pleasure of setting our photographic narration in the birthplace of one of the most innovative and prestigious Italian wines: Luce, whose estate, Luce della Vite, lies on the outskirts of the wonderful Tuscan village of Montalcino.

We have had the pleasure to meet Marquis Lamberto Frescobaldi, owner of both the brand and the estate, to discover its story, values and secrets. 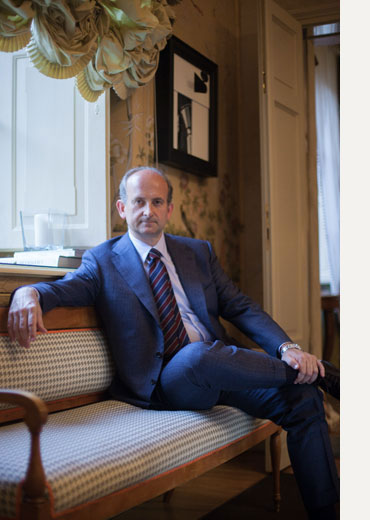 When was Luce created and what was the idea behind it?
Luce came about after a meeting held in the early nineties to discuss an idea shared by two of the top names in wine in the world: my father, Vittorio Frescobaldi, and Robert Mondavi. They both dreamt of creating a different, exceptional wine, in the heart of the Montalcino area, bringing together their passion, experience and different cultures.

The story of Luce goes hand in hand with innovation. A significant aspect that is in common with the story of the Attolini family, credited with having revolutionised menswear once dominated by the prevailing notion of typically British elegance when Vincenzo designed the first unlined jacket in 1930. Do you find this parallel is justified?
Luce was certainly an innovative and a revolutionary project. Tim Mondavi and I were just young winemakers at the time, but we took the vision of our fathers’ and turned it into something tangible with a new and magical blend of Sangiovese and Merlot. We released the first two vintages of Luce, 1993 and 1994, together in 1997 and became a talking point in the world of wine because of the project’s surprisingly innovative personality.

And this was just the beginning: the appearance of this new label and its unprecedented creativity was initially met with a degree of uncertainty but this gradually gave way to an acknowledgement of its undisputed quality. 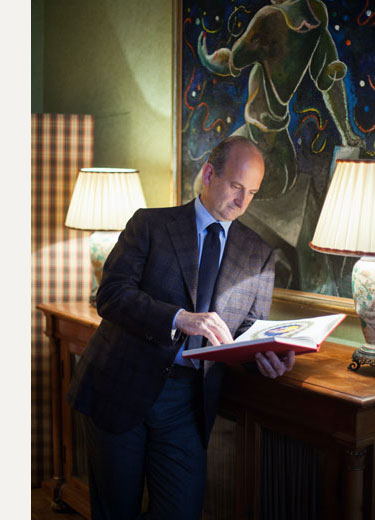 85 years have passed since Vincenzo Attolini cut out his first Neapolitan style jacket, known simply as the “Jacket” by many people today. Since then, Cesare Attolini has continued to work on the tricks of the trade passed down from his father, and now Massimiliano and Giuseppe, the third generation of the family, are at the helm of an organised business and a very successful brand. It has been twenty years since the first vintage, what role have you and your partners played in ensuring the ongoing expansion of the Luce project?
The 2004 vintage marked the end of the partnership with Mondavi. Since then, I have continued to be personally involved with the Luce project, making the decisions regarding its production, from the vines to deciding the blend of each vintage, and at the same time making sure we continue to enjoy excellent relationships with our customers. Our wines are made with a traditional approach, both in terms of how we manage the vines and in the winery itself, based on paying the utmost attention to every single detail. Our rigorous quality selection leads to very limited production and so the same level of attention and exclusivity has to be applied in commercial terms. We have continued to pursue and expand these factors so that Luce has established its name internationally, enjoying solid growth around the world.

The wonderful Luce della Vite estate is located just outside Montalcino, the place where the dream of Luce became true. Can you explain what makes it so unique?
The Luce della Vite estate lies in an extraordinary area, south-west of Montalcino. 192 hectares of land, including 77 hectares of vineyards. The Luce della Vite estate is one of the highest in the region, at an altitude ranging between 350 and 420 metres above sea level. The soil in the higher areas is particularly rich in galestro clay, ground that is well-drained and poor in organic matter, making it ideal for growing Sangiovese grapes. The soil in the lower areas has more clay and is better suited to Merlot grapes. The area has a microclimate that alternates hot, dry days and cool, ventilated nights. What’s more, the vines all face south, resulting in grapes that are perfect for making very concentrated and robust wines. We focus on achieving the ideal balance between the vines and the land, as we are firm believers that a wine should be the natural expression of the place where it is made and of the grapes that it is made from. 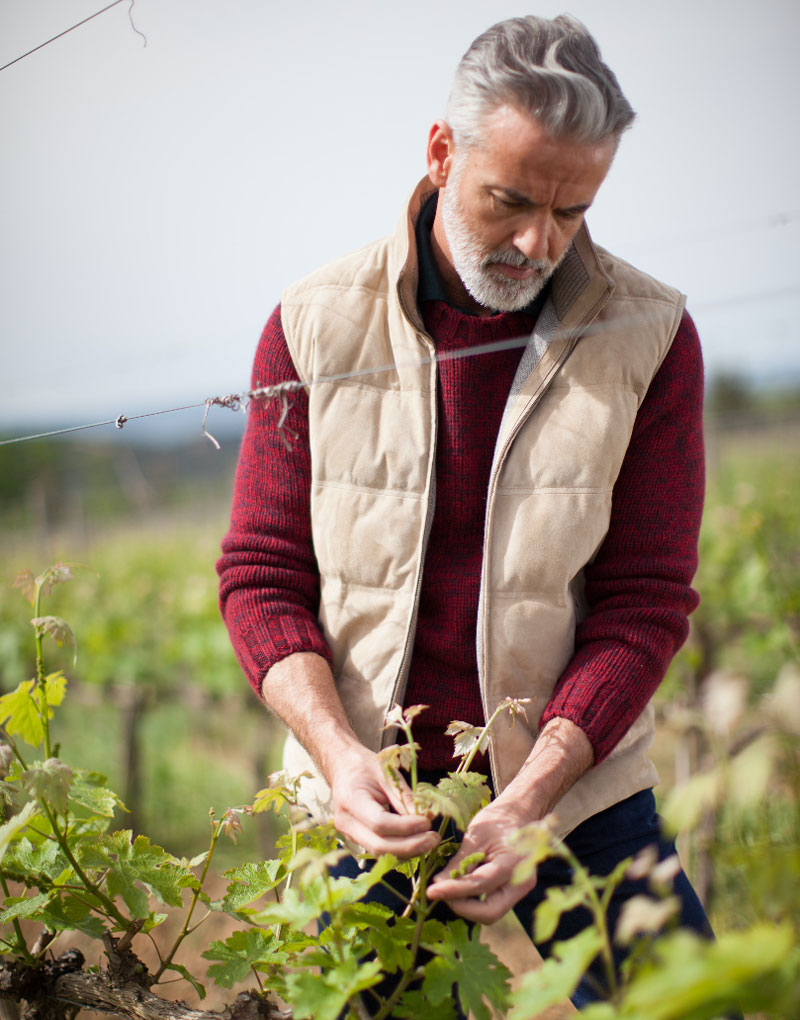 At Cesare Attolini, the undisputed excellence of a garment starts with the choice of the best fabrics available. I imagine that you put a similar focus on the categorical quality of your raw materials, your grapes. We have the same philosophy in tailoring. Each step is carried out with great care by a single master tailor: a combination of expertise – matured by Vincenzo and Cesare Attolini in decades of daily work – skill and time. On the same line, I imagine that you use a similar formula in your winery that does not allow for shortcuts.
We are obsessive about how we care for our vines. You will only get the best quality, especially in climatically challenging years because of high temperatures or heavy rain, if you pay proper attention to managing the vines. Year after year, the vines enter into a virtuous equilibrium and the grapes are able to reveal their special character in the wine produced. Hand-picked grapes, selected grape by grape in the winery, result in uniquely excellent wines that are left for 24 months to age in wood.

By the way, why did you choose the name Luce and where does its logo come from?
Luce means light, and light is the origin of life. It is joy, it is the opposite of darkness … it is the energy that generates and nourishes the vines, the heat that helps the grapes to ripen, it is the glow in the wine reflected in the glass.  Luce is a sun, with a crown of twelve sunbeams. At the end of the fifteenth century, Brunelleschi was commissioned to build the church of Santo Spirito in Florence, on land donated by the Frescobaldi family. Luce’s label was inspired by his drawings for the High Altar in this Renaissance masterpiece. The heart of the sun is as red as the soil of the rolling hills surrounding Siena. It is a symbol pointing to our roots, a statement that Luce combines the earth and the sun. 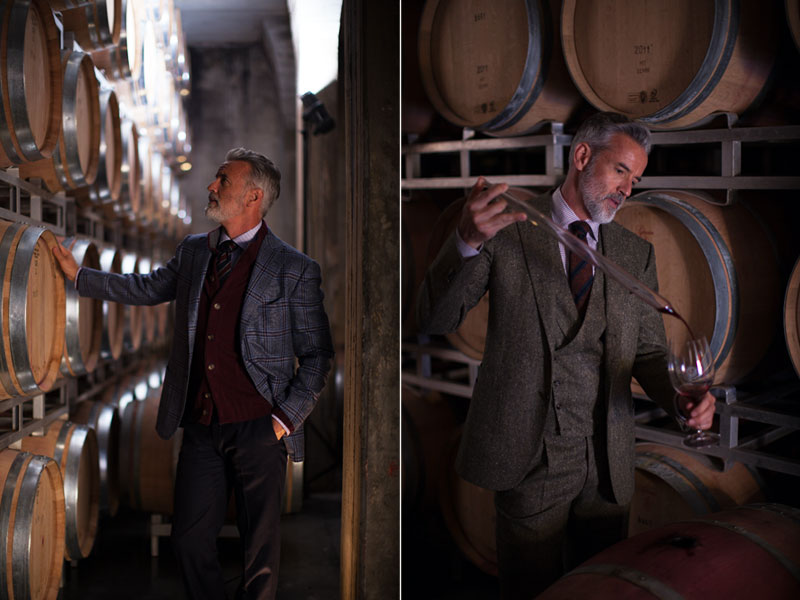 What light do you see as illuminating the future of Luce and the Luce della Vite estate?
The first twenty years of Luce went by in a flash. It has been a marvellous time, and year after year we have created a jewel that all of Italy can be proud of. We already know the challenge that lies ahead. It’s about consolidating the fame of Luce among the younger generations in new markets around the world, to help them understand not just the quality of Luce but the quality of Italy too.

Everyone involved has always been clear as to their intentions, starting with Vincenzo, then Cesare and now Massimiliano and Giuseppe Attolini: anyone wearing an Attolini jacket should appreciate its harmonious and impeccable design and its comfortable fit like a second skin. What would you like your customers to picture in their mind when they close their eyes and take their very first sip of Luce?
When you open your first bottle of Luce and taste it for the very first time, you should be captured by its quality and imagine yourself transported to the Montalcino hills, among the Luce vines, before surrendering to the satisfaction of the senses. It should be a unique experience, when you feel at peace with yourself, one that makes you want to repeat it.